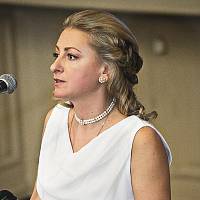 Irina Bagdasarova,  Candidate of Sciences in Art History, is custodian of the Collection of Russian Porcelain and Ceramics, senior researcher, and academic secretary of the Department of the History of Russian Culture at The State Hermitage Museum. She got a degree in Museum Studies and Heritage Conservation from Saint Petersburg State University of Culture and Arts in 2001 and a degree in History and Theory of Visual Arts from the Saint Petersburg State Academic Institute of Painting, Sculpture and Architecture in 2006. In 2012, she received a Candidate of Sciences degree in Art History for her thesis “Antique Reminiscences in Russian Imperial Porcelain of the Second Half of the 18th Century”. Her research interests include Russian porcelain of the 18th and 19th centuries; attribution of old Russian porcelain; and consulting on contemporary porcelain with regard to the practices of copying old works and creating new wares. Irina Bagdasarova has authored over 70 publications and given lectures on the history of Russian applied art and porcelain. She has curated and coordinated numerous exhibitions at The State Hermitage Museum and in cooperation with other museums: “Heraldry on Russian Porcelain”; “‘Antique Style’ in Russian Imperial Porcelain in the Second Half of the 18th Century”; “Under the Family Crest and the Imperial Eagle”; “From the Dinner-Service Storerooms: Decorating the Russian Imperial Table in the 18th  to Early 20th  Centuries”, “‘Believe Not Thine Eyes’: Trompe-l’oeil in Art”; “Treasury! Masterpieces from the Hermitage”; “Sounds of the Perfect Past: Russian Porcelain from the Hermitage”; and others. She is an expert on cultural valuables at Rosokhrankultura and a member of the Expert Committee for the Purchase of Artworks. She is the head of the development and implementation of applied programs at The State Hermitage Museum and a coordinator of the International Youth Advisory Board of the “Museum 15/24” project. She has repeatedly received the diploma “For Contribution to the Development of The State Hermitage Museum” from The Vladimir Potanin Foundation.